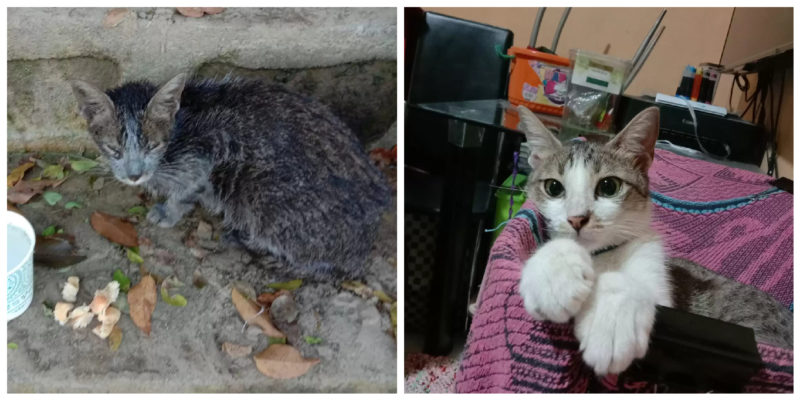 Last November, Blessie Mae Ayalde, along with her father, made her way on a motorcycle through the streets of the Philippines destroyed after a hurricane, and suddenly noticed a kitten lying in a puddle of mud. The typhoon claimed the lives of many homeless animals, and Blessie thought that the poor cat was one of them. But suddenly she stirred.

Blessie came closer, and the kitten moved towards her.

She purred and began to rub against the outstretched hand, as if she had known the woman for a long time. The Filipina’s heart sank, but she could not take the cat home at that moment and was forced to leave the animal on the street.

All night, Blessie could not sleep – the image of the unfortunate animal did not go out of her head. In the morning, she grabbed her bag and rushed to the place where she left the foundling.

Blessie brought the cat, whom she named Elon, home, bathed her, gave her medicine and began to feed her with a syringe.

Luckily, the kitten survived and is on the mend.

Every day, the cat gained more and more weight and got used to the new house. She turned out to be a cheerful pet, ready to run and jump around the clock like a kangaroo.

And Elon kept asking for attention from her owner and meowed loudly if she didn’t get it.

Not only the behavior of the cat has changed, but also her appearance.

Attentive care and attention have done their job. Hidden under a layer of dirt and engine oil was a white and gray shiny fur coat. In this affectionate beauty, it was no longer possible to recognize a skinny, sick kitten lying in a puddle of mud.

That animal was doomed to die.

But Elon hit the lottery and found a new life in a family where she is truly loved.