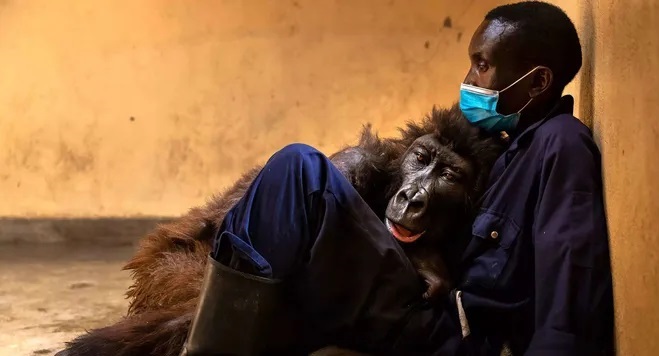 The mountain gorilla named Ndakasi became known to the world after a series of selfies with the ranger of the Virunga National Park in Congo – Mathieu Shamavu, in which the ape very humanly straightened up to its full height and posed for the camera.

Mathieu and Ndakasi met in 2007. Then the ranger, along with another park employee, Andre Bauma, unhooked the two-month-old gorilla from the lifeless body of her mother, who, along with other members of her family, was killed by the “meat hunters” and took them to the Wildlife Rescue Center at Virunga National Park.

There, Ndakasi was settled with another orphan – Ndeze, who had also lost her relatives.

The cubs were too small and too weak to live in the wild without adults. But in the center they tried to provide them with a comfortable, well-fed life, as close as possible to the natural environment. The Rangers did not forget their ward. They saw each other almost every day and the gorillas that grew up before their eyes perceived them as part of their troop.

Having lost her family, Ndakasi desperately needed the protection and care of adults. She reached out and became more and more attached to her saviors, who replaced her family.

And even to die, a 14-year-old gorilla came to Andre. She was ill for a long time. In mid-September, her health deteriorated dramatically, and last week she took her last breath – in the loving arms of her savior and longtime friend Andre Bauma.

In a touching photo shared by Virunga National Park, the ranger is sitting on the floor with his back against the wall, and Ndakasi is lying on top of him with his her on his chest.

The man’s arms hug the gorilla just like 14 years ago, when he found her, very small, among the dead members of her troop. According to Andre, it was a privilege for him to take care of the wonderful creature all these years, especially knowing the emotional trauma Ndakasi went through as a child.

“Thanks to Ndakasi’s gentle nature and outstanding intelligence, I was able to feel the connection between humans and great apes and understand why we must do everything in our power to protect them,” says the ranger. “I am proud to be able to call Ndakasi my friend. I loved her like my own child. She was funny and always made me smile.”

Birth of these quadruplets was discussed by the whole world 11 years ago: look at them now
Interesting News
0 195