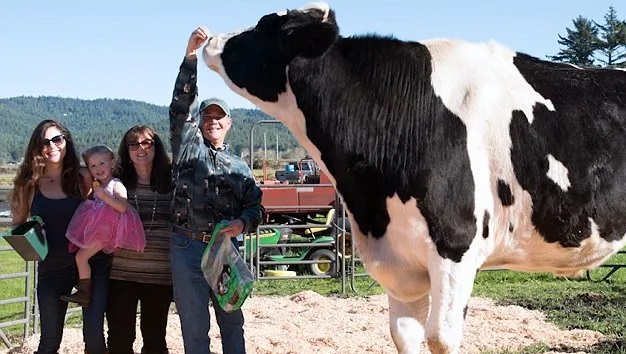 Farmers Ken and Ann Farley inherited this incredible creature from a distant relative.

They spoiled him in childhood, they allowed him a lot, but he doesn’t need anything other than to overeat. 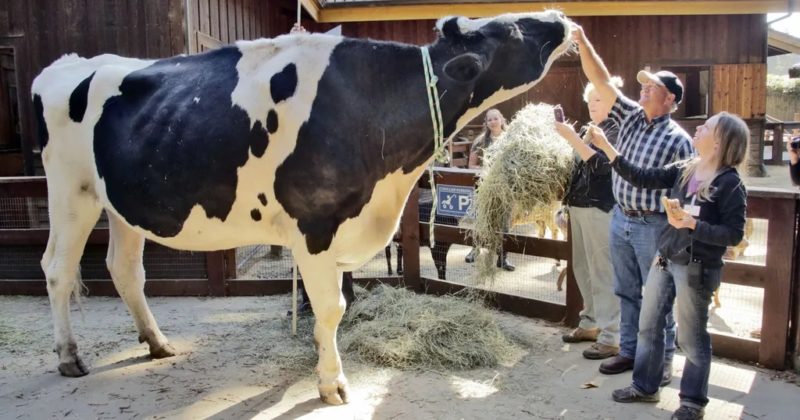 Affectionate as a puppy – a cow named Danniel reaches 2 m and weighs more than a ton, which makes it one of the largest on the planet, although the official record has not yet been recorded.

When Danniel was only 6 months old and still bottle-fed, the owners already felt something was wrong.

The calf ate like crazy and soon began to knock the containers out of their hands.

They had to transfer him to pasture ahead of schedule – today the monster’s diet is 50 kg of hay, 8 kg of grain and a couple of hundred liters of water daily, according to the farmer.

Danniel never complained about his appetite.

Due to the high cost of keeping the cow, it had to be transferred to a special contact farm, where the animals can pay for their feed through visits from guests.

Few people dare to pet Danniel, most just stand with their mouths open when they see him, although the giant is not at all aggressive.

And why would he? Danniel is the lucky one who lives in a separate barn built especially for him, plus a hearty meal and everyone’s attention.

And you can also feed him cookies, which he loves.

The current owners have submitted an application to the Guinness Book of Records, but so far everything rests on bureaucratic delays.

The previous record holder, cow Blossom, 5 cm shorter than Danniel, died in 2015 and the champion’s place is vacant.

Interesting News 0 14
Mrs. Pocock, originally from Idaho, lives near the channel, which always has a strong

Artists paint portraits of stray dogs and the pictures make them positively irresistible, so they find forever homes
Animals
0 221

The chain did not allow the dog to get out from under the rubble of the house destroyed by the hurricane, but fortunately she was saved
Animals
0 338