Munchie is an adult cat with the appearance of a kitten, which weighs only 1.6 kilograms. 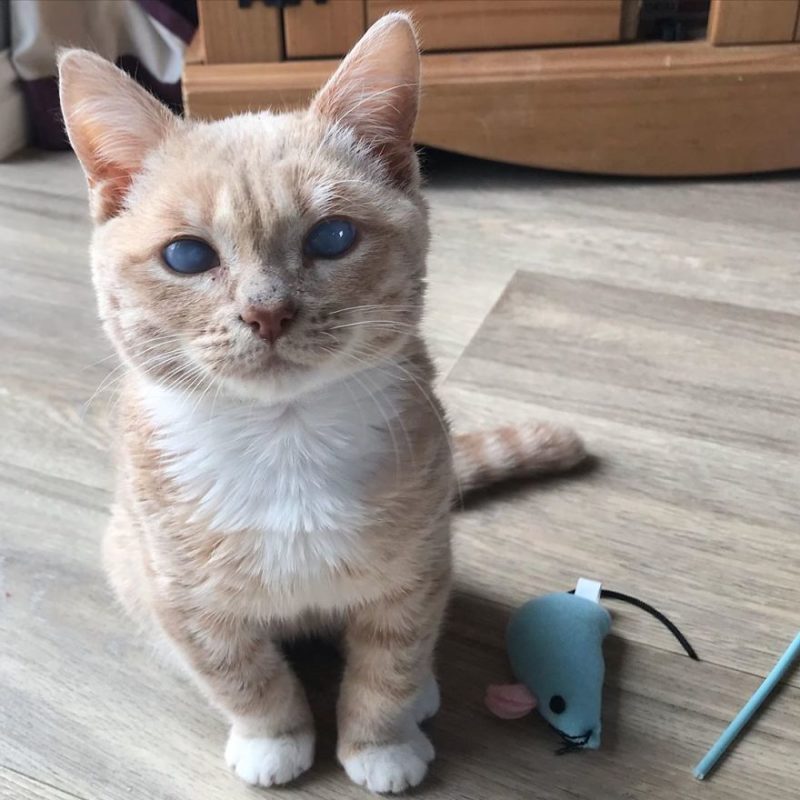 He will never grow up due to a rare disease – hypoparathyroidism, which, besides him, is registered in only one cat in the world.

Passers-by found him in the park and brought him to the veterinary clinic in Wolverhampton, where the woman worked at that time. He looked about 3-4 months old.

Previous owners may have thrown the kitten out into the street because of “cloudy” eyes – a defect caused by bilateral corneal edema, which, however, did not affect vision in any way.

Emily sheltered Munchie for a week. But when there were no people willing to take the kitten home, she decided to leave him for good.

All was going well, but at the end of December, Munchie suddenly fell ill.

Emily immediately took him to the doctor. The results of the examination revealed that the kitten had an extremely low level of calcium.

At that time, it did not occur to anyone to take an analysis for hypoparathyroidism. Because the disease is extremely rare. Everything became clear much later – as well as the fact that the baby needs lifelong support with drugs containing calcium and vitamin D.

According to the owner of Munchie, he looks like an ordinary kitten.

But there are days when he is quiet and barely plays. This is all due to his illness, which often manifests itself through lethargy and fever.

“Munchie is a very affectionate kitten. If he needs my attention, he crawls into my lap, loves to sleep with me and rub his muzzle on my face,” – this is how Emily described her pet.

According to her, it was “love at first sight.”

As soon as she saw Munchie, she realized that it was her kitten.

The shelter pit-bull thinks that he is a cat, and his new family keeps posting photos to prove it
Animals
0 557

Catwoman of our times: what a woman with an unusual appearance looked like before plastic surgery
Interesting News
0 229