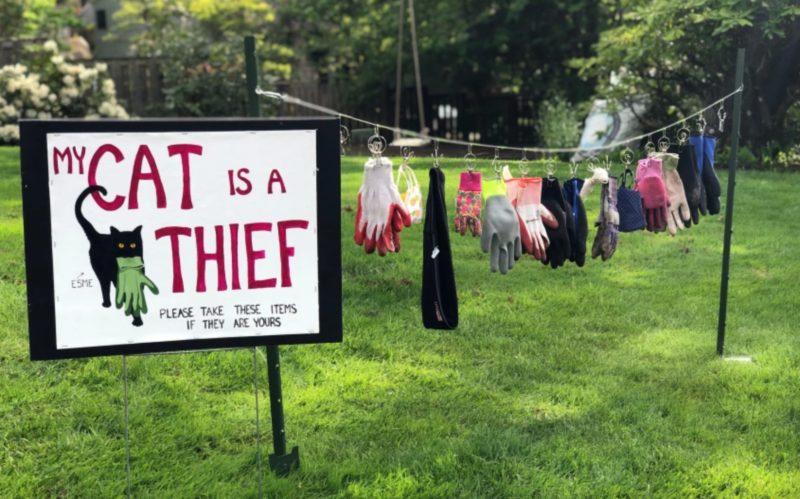 While the owner did not let her out of the house, she collected doll dresses and various pieces of fabric from room to room.

And when Esme began to go out into the street, she began to drag everything she could find from neighboring houses and gardens. 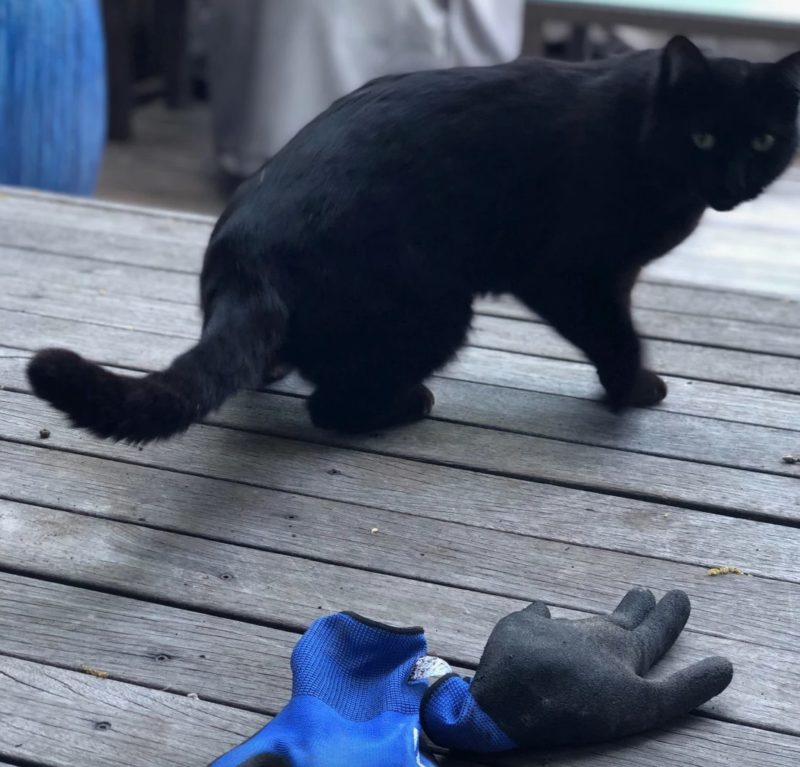 After the first walk, she came home with crumpled paper and a plastic bag in her teeth. It only got worse from there.

Masks, gloves, knee pads, pieces of cloth, a camera, a stuffed bat – the cat often returned with “gifts” for the family.

As she grew older, Esme improved her skills and learned to choose the most valuable among things.

So, during the pandemic, the cat “rescued” the family by constantly bringing home face masks – sometimes 10 pieces a day!

Sometimes it even seemed to Kate that her pet was specifically looking for items that are related to what her mom is currently doing.

So, when the woman decided to repaint her daughter’s room, Esme started bringing home paint roller covers and duct tape.

Esme rested from the thieves’ business only in the winter, as she did not like snow and rain.

But as soon as spring came, the cat went hunting again.

The good-natured Kate covered her pet for years.

But then her conscience tormented her, and she decided to organize an exhibition of things stolen by a cat in the garden so that the neighbors could pick them up.

Kate hung clothes, gloves, and masks on a stretched rope, and placed a sign next to it: “Please take these items if they are yours”.

The exhibition immediately attracted everyone’s attention, and people began to flock to it.

The neighbors were happy to return the stolen items, although they had to part with many items forever.

And soon the photo from the exhibition got into social media, and residents from other parts of the city began to come for their property.

At this point, Kate felt quite embarrassed.

It turned out that her fluffy thief was operating not only in her native area but throughout the city!

Where the cat has such habits, Kate does not know but guesses that she could contribute to their appearance, because at the initial stage she praised the pet for every thing she brought home, motivating her to steal again and again.

She is no longer able to change the behavior of the cat, but she has found a good compromise, which should help her remain an affectionate mom without ruining relations with her neighbors.