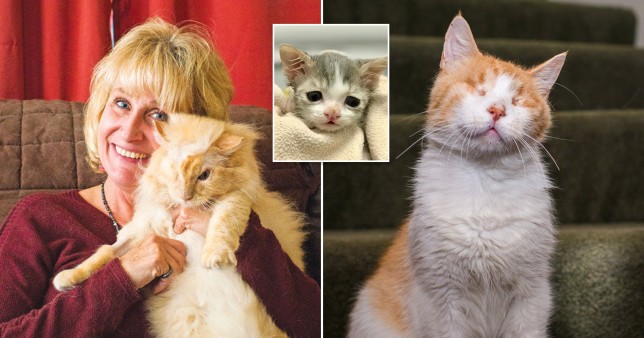 Michele Hoffman from Santa Barbara has been in the film industry for many years. She is constantly busy, but in her busy schedule, the woman found a place for one good deed – Milo’s Sanctuary, which she opened for cats with disabilities or terminal illnesses.

It is small and can only accommodate 75 animals at a time. The wards of the shelter come here from all over the world.

These are cats with birth defects, severe injuries, serious pathologies, or simply with a difficult fate. Delicious food, medical care, soft beds and a lot of love and care await them at Milo’s Sanctuary.

Unfortunately, some of them do not have time to appreciate the new living conditions and leave this world as soon as they arrive at the shelter, but they die happy, in the arms of volunteers who hug them until the very last second.

Michele Hoffman: “No one should leave life feeling unloved, unwanted and worthless”

One of the residents of the shelter is a 6-year-old cat named Biscuit Butterpaws.

He was taken out of Mexico, where a man beat him with a club, breaking his jaw and gouging out his eyes, which left the cat permanently blind.

Despite everything experienced, the poor fellow did not lose faith in people. He is a kind and affectionate pet, responding to care with great love. 8-year-old Chloe was found in a pack of feral street cats in Los Angeles. She developed a fungal infection that “ate” part of her nose.

Dill the cat was born with a cleft nasal cavity, a partial cleft palate, and cerebellar hypoplasia. Seeing the “defective” kitten, the family gave him to a shelter, and no one was willing to take him. Although the wards of the shelter receive all the necessary medical care, not everyone manages to go out.

Michele especially remembered the cat Tommy. He was found in the California desert with severe burns – someone poured acid on the animal’s head.

The cat came to the shelter in 2016 and died three years later from the immunodeficiency virus.

“He was the most gentle and forgiving cat in the world. He loved everyone,” recalls Michele. At Milo’s Sanctuary, they focused not on quantity, but on quality.

Michele can only accept a limited number of animals, but guarantees them the best conditions that each of them deserves.

Some manage to be placed in good hands, others are destined to end their lives within the walls of the sanctuary, but these will be their best days. “They just need a little more of your patience, care and love.”