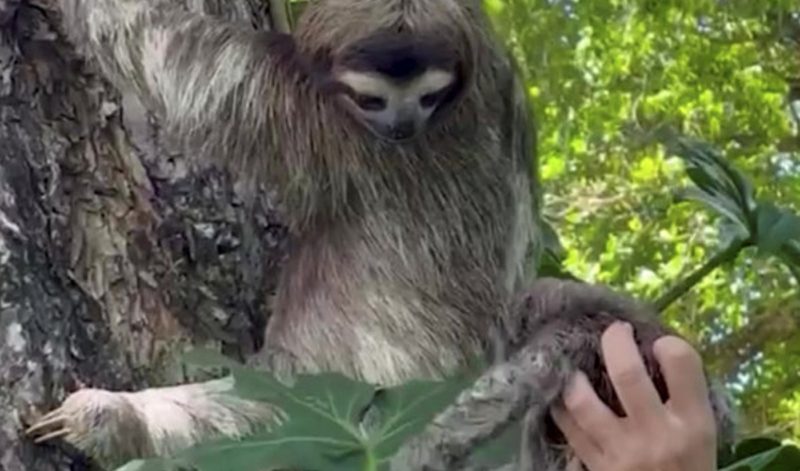 A few days ago, volunteers from a Jaguar Rescue Center in Puerto Viejo de Talamanca, Costa Rica, found a small crying cub on the beach, which turned out to be a baby sloth.

The baby got lost and obviously really wanted to go to his mother, but he could not climb the tree on his own.

People took the baby sloth from the beach and took it to the vet to check on its condition.

The doctor said that the cub is absolutely healthy, despite the fact that he has not eaten or drunk for a long time.

To reunite the baby with his mother, the volunteers came up with a plan to do it quickly and safely.

They recorded the cry of a little sloth on a recorder and left it under the trees.

When the sloth mom heard familiar sounds and began to descend, the rescue center staff slowly began to approach the tree trunk she was on.

Once on the ground, the mother began to look around and suddenly noticed her child in the hands of a man, who immediately let out a joyful and at the same time pitiful squeak.

She carefully approached one of the volunteers, took the baby and hugged him tightly.

The Jaguar Rescue Center was overjoyed that they were able to return the baby sloth to its mother. Next to her, he will be safe and comfortable.

“Our hearts melt every time we manage to reunite a cub and its mother. And this case is no exception.” Volunteers posted on social media.

A kind teenage girl wins an essay competition and donates a $ 50,000 prize to the shelter where her cat used to live
Interesting News
0 283

Cute Corgi, rescued from a breeder, comforts a stranger at the airport the second she feels he needs a friend
Animals
0 384