Duke, a dog from a shelter in Portland, was adopted by the Brousseau family. 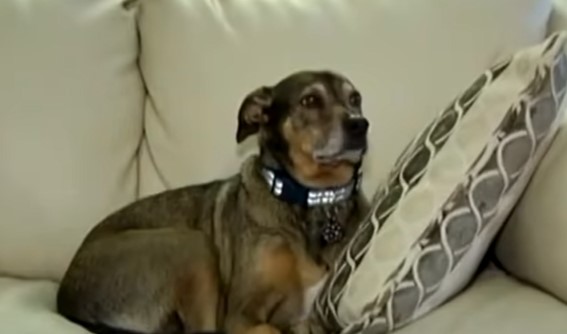 Duke did not like living in the shelter at all, and when he was adopted, he expressed his gratitude to the family in the best possible way.

Some time ago, a girl named Harper was born into the family.

One night, when everyone was sleeping, Duke in panic quickly ran into the owners’ room and climbed onto the bed.

He tried his best to wake up the owners.

When they woke up, they noticed that the dog was shaking all over and refusing to calm down.

He ignored all the commands of the owners, and then the mother realized that something was wrong here.

They realized that the dog was trying to lead them somewhere.

The family followed him and ended up in the room of their newborn daughter.

The dog pointed anxiously at the child, who wasn’t breathing.

The family quickly realized and took the baby to the nearest hospital, where she was saved at the very last moment.

And only after Duke realized that his little sister was not in danger, he calmed down.

The family doesn’t even want to think about what might have happened if Duke hadn’t been around.

They are eternally grateful for their pet and hope that their story will motivate people to give shelter loyal dogs a chance.

Interesting News 0 16
An accident happened to the cat named Buttercup on a walk, as a result

In South Africa, an incredible incident took place that reminded eyewitnesses of a scene from the popular movie The Lion King
Animals
0 298

When the homeless man was taken to the hospital, all his faithful dogs were waiting for him for hours in front of the hospital
Animals
0 387