Max is a cross between a Stafford and a bulldog. He was not trained as a lifeguard. He did not undergo any special training. It’s just that when the right moment came, he did what he had to.

Max grew up on the street and at first, he had difficulty understanding what a healthy relationship between a person and a dog looked like. 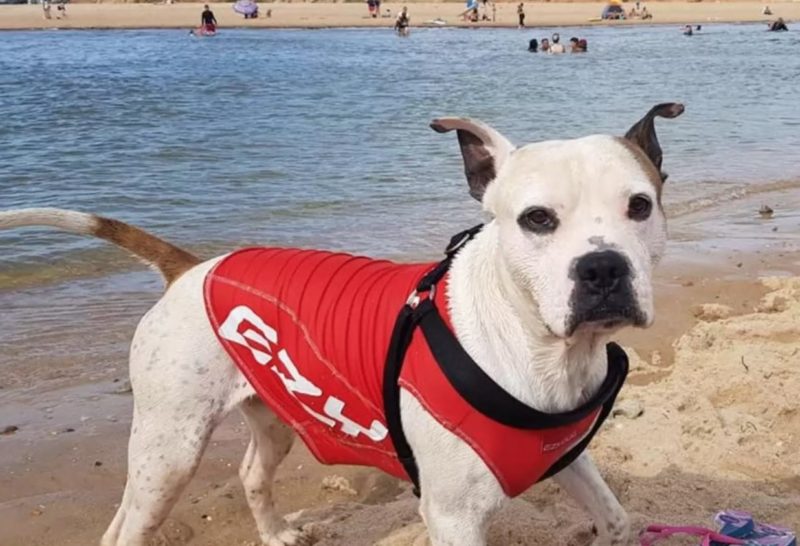 He was afraid to go out for walks – what if they would leave him again? He didn’t really like being petted. If the owners squeezed Max too much, he just got up and went to the far corner.

It took him a long time to believe that he was really welcome here and to become attached to the owners in return.

He constantly smiles and spends a lot of time walking with his owners.

After the family moved into a house in Port Noarlunga on the Australian coast, Max really fell in love with splashing in the water. And he just loves 11-year-old Nev: he sleeps in his bed, and when Nev goes to the beach, Max goes with him.

Nev’s parents often go kayaking. His father Rob loves surfing and snorkeling. Max also loves to swim and dive, but gets tired quickly. So the owners bought him an orange life jacket – so that the dog is always safe.

While Rob and his friends are catching the ocean waves, Max is sitting on the beach like a good boy.

That day, Max was relaxing with Nev on the beach while Rob was surfing, when suddenly the atmosphere

A little boy was caught in the reverse current and dragged into the open ocean. The child panicked.

Instead of rowing along the shore and getting out of the current, he swam against the current, straight to the shore, and was instantly exhausted. The boy began to sink. At that moment, Rob noticed him, but he could not come to the aid of the child.

Then the owner called Max. The obedient dog at that time was splashing in water in his life jacket.

On command, he swam towards the drowning child. He just did what he knew best and what he loved – he hardly thought that he was saving a child’s life.

The boy grabbed his life jacket and Max helped him stay afloat. A strong dog easily overcame the current and dragged the drowning boy to the shore.

Max had to return immediately: the girl, the girlfriend of his owner Nev, also began to run out of strength, struggling with the current not far from the coast.

The dog towed her to land. For this, the parents of the rescued children unanimously declared Max a hero, but he did not become arrogant at all – nothing had changed in his life; except that there were a little more treats and friendly hugs.

A miracle of nature, a two-faced cat named Yana with a unique coloring wins the hearts of netizens
Animals
0 417