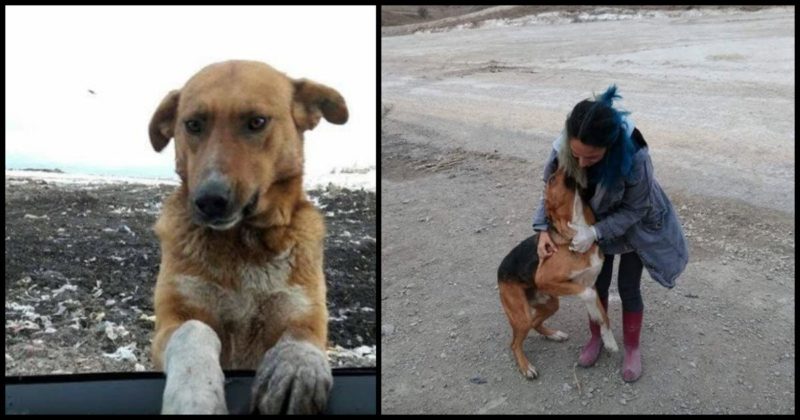 A dog named Hercules every time met guests from cars parked next to the garbage dump. He greeted people and looked hopefully into their eyes, begging them to take him and give him the opportunity to live a better life.

“He would jump up and down the windows of cars and cling to every person,” recalls Amanda Cunefare, a volunteer for Rescuers Without Borders. A lot of stray dogs live in a dump in Turkey. Volunteers counted over 800 animals. They are born and die in this place. They no longer hope for anything and trust no one.

“It is very cold in this place, there is no clean water and food. Each animal fights for resources with others. After the dog manages to find something and eat, it burrows into a pile of garbage to keep warm, then falls into a restless sleep. It’s a terrible place to survive,” the woman says. In 2014, Gocke, an animal rescue woman, started feeding dogs from the dump and caring for sick animals.

Most of them went to the United States, where they found foster families.

Since there are not enough human resources, volunteers give priority to puppies and older animals. It is especially difficult for them to survive when winter comes.

Since Hercules was neither a puppy nor an elderly dog, and seemed to be quite healthy, they decided to leave him to spend the winter in a dump. Rescuers made sure he had food, water, and a warm place to hide from the cold.

However, the charismatic dog was determined to get out.

Each time he looked into people’s cars and eagerly accompanied them on rounds. Then Amanda decided to adopt Hercules and the 10-year-old dog Dudas, who lived in the dump for at least five years.

Dudas motherly took care of Hercules, and they could not be separated.

So, the animals ended up in Chicago!

Today, Amanda’s family has six dogs from a Turkish dump. “I have been saving animals for 13 years and have never seen calmer dogs than those that I brought from the dump. Incredible gratitude is read in all their actions,” the woman says.

So, thanks to caring people, animals get a chance for a happy life in a warm house and with their favorite owners!

When the homeless man was taken to the hospital, all his faithful dogs were waiting for him for hours in front of the hospital
Animals
0 385