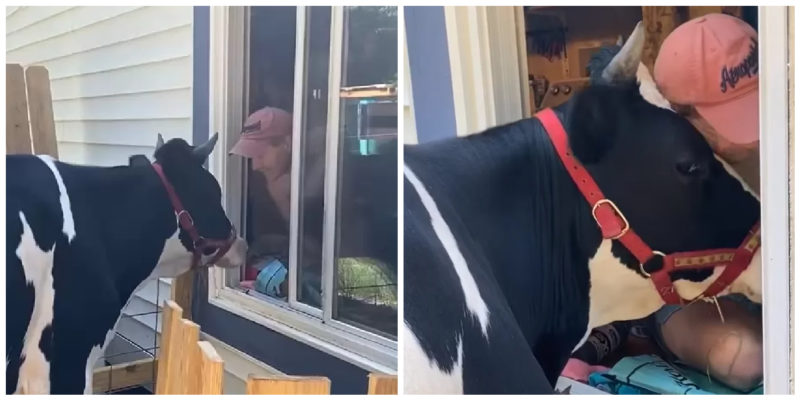 There is an opinion that farm animals are not very smart, but this is not at all the case.

Meet this adorable cow mooing impatiently at the farmer’s window for a helping hand. Once a man saved her, and now she is infinitely devoted to him, and thanks him for life every day.

This cow was destined to be killed because she was born barren and unable to produce milk.

But at just three days old, she was taken in by 42-year-old Ryan Phillips, owner of a non-profit farm animal shelter. A friend told him about the calf, and Ryan immediately went there and rescued the baby.

The man named the calf Jenna, he looked after her and took care of her like a small child. A strong bond has formed between the human and the pet.

Many months later, they are still inseparable.

A cow will not graze until she greets her savior in the morning, and will not sleep until he hugs her in the evening.

Such affection can only be envied.

Ryan Phillips said: “Jenna treats me like I’m her best friend, or even more. I’m her mother, taking care of her when she was little. I used to bottle-feed her, and she poked me in the stomach, trying to get me to give her more milk. I spent every night sitting with her in the barn and talking, making sure that she was healthy and happy. She made me laugh and warmed my soul. ” Not surprisingly, the two still have a close bond.

The cow comes up to the farmer’s window every morning and moos until he comes out and hugs his pet.

They spend a lot of time together during the day. Then in the evening they say goodbye tenderly before going to bed.

“We are really best friends,” says Ryan, “Jenna is a member of my family, she is dear to me.”

A little boy has to do his homework under a dim street lamp, a millionaire notices him
Interesting News
0 539