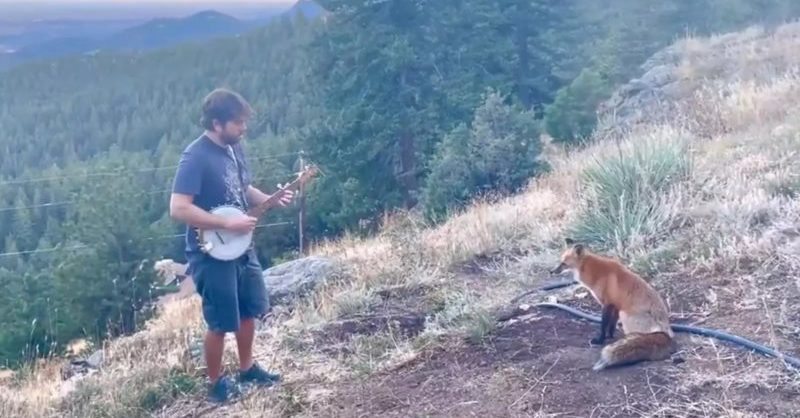 Every musician dreams that sooner or later he will have loyal fans who would appreciate his work.

But a resident of Colorado, Andy Thorn, did not even think that high in the mountains above Boulder, someone other than him and his friend would admire him playing the banjo.

But suddenly, the music of the man had a charming red-haired fan.

A curious wild fox came out of the forest after hearing the banjo and sat down next to the musician to listen to the mini-concert he had arranged.

For a while, the fox enjoyed the melody, and then decided to explore the area a bit. Then Andy thought that his four-legged guest was going to leave, but no!

The fox returned to its seat to continue listening to the music.

The tailed music lover eventually went about her business, but visited Andy again the next day.

“Once, when we were in the mountains, a fox came to us, and we thought: “Wow, apparently she really loves music.” Then the next day I was sitting on a stone in the yard and playing the banjo, the same fox came up to me and sat down beside me. She just looked at me and listened to the music. It was incredibly cool.” Andy Thorne said.

After that, Andy’s furry new acquaintance became the inspiration for his music album called Fox Songs and Other Tales From the Pandemic.

Albino girl was born in Mexican family: now she has grown up and has become a beauty
Interesting News
0 378

The big problems of little weight: see how the girl who weighed only 23 kg changed
Interesting News
0 181