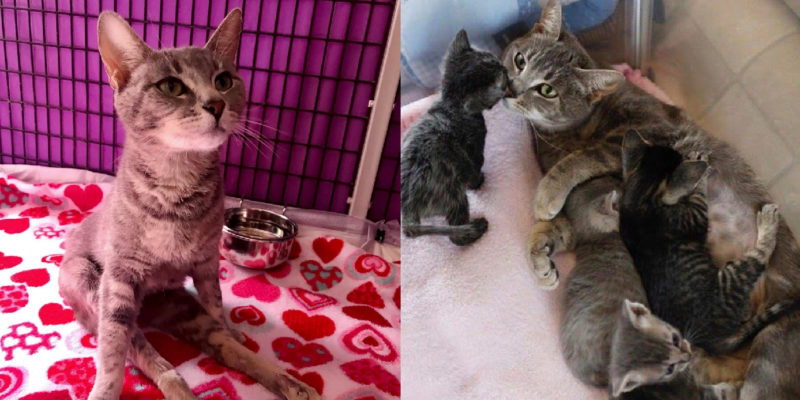 In the suburbs of Los Angeles, passers-by found a cat with paralyzed hind legs.

The cat was also pregnant. 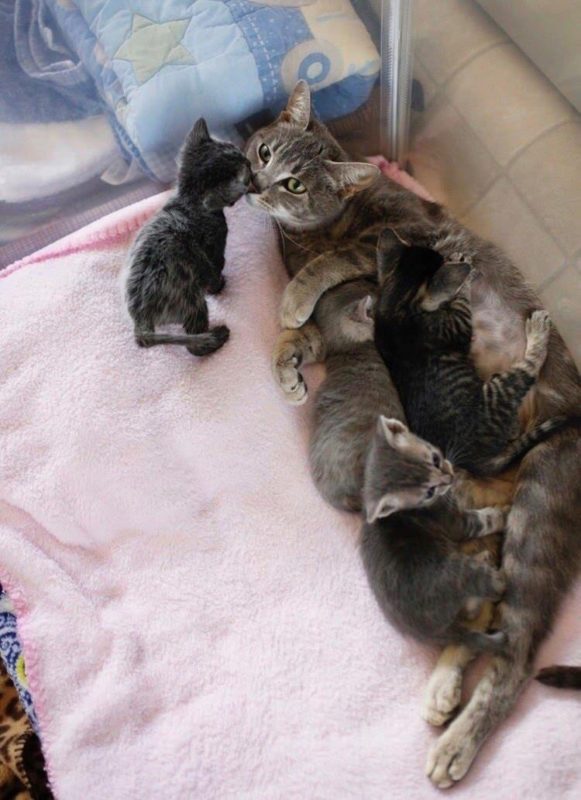 When the cat was brought to the city shelter, the cause of her paralysis was found out – a bullet was stuck in the lower part of the spine, someone shot at this cat.

According to volunteers, the cat was seriously injured and only miraculously survived, possibly for the sake of her kittens. 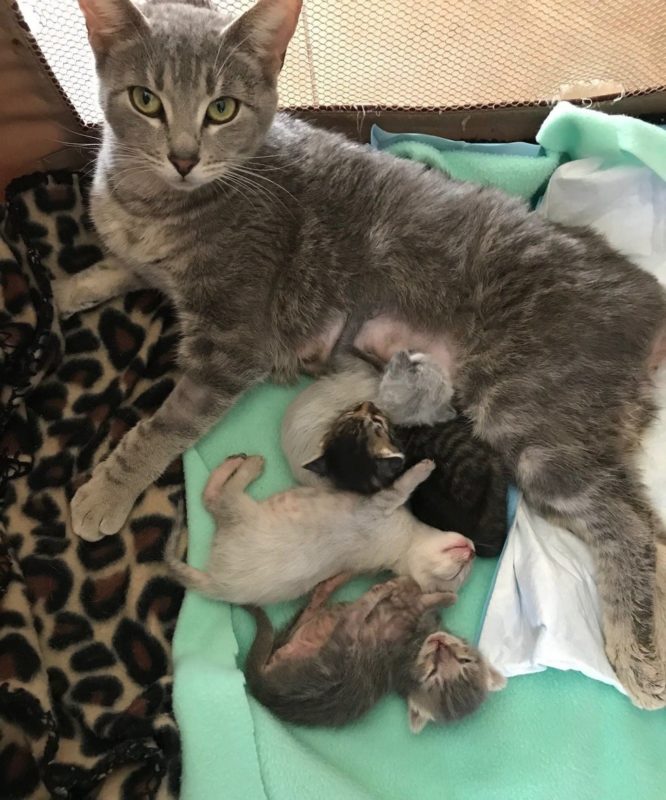 Soon she began giving birth. But apparently because of her paralysis, something went wrong and the first two born kittens died immediately.

The cat was then taken to the veterinarian, who performed a Cesarean section on her.

He brought out four more kittens, and they were all alive and well.

Having barely recovered from the operation, the cat began to feed the kittens and turned out to be a very caring and attentive mother. 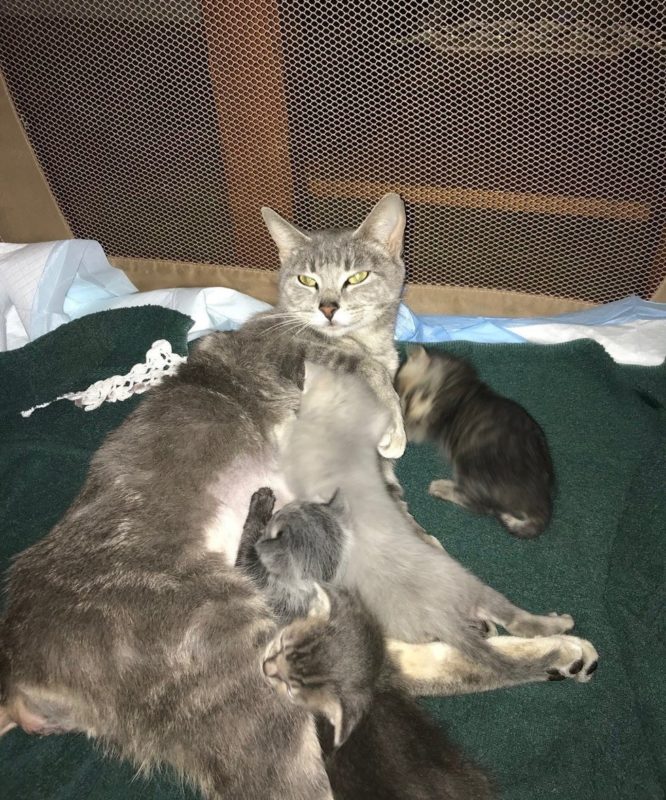 A little later, two kittens found on the street were placed next to her, and she adopted them as her own and also began to feed them.

Unfortunately, nothing could be done about her paralysis. It was clear that the cat would forever remain with immobile hind legs.

She also had problems with bladder control and had to wear diapers.

The cat successfully fed six kittens. And when they grew up, they all found new owners.

Now it was the turn of the mother cat herself to find a permanent home for herself.

Although in her case everything was much more complicated, few people dare to take in a cat with a disability, which needs constant care.

They tried to look for the owners of the cat, but they did not find anyone. And even the question arose of euthanizing the cat. 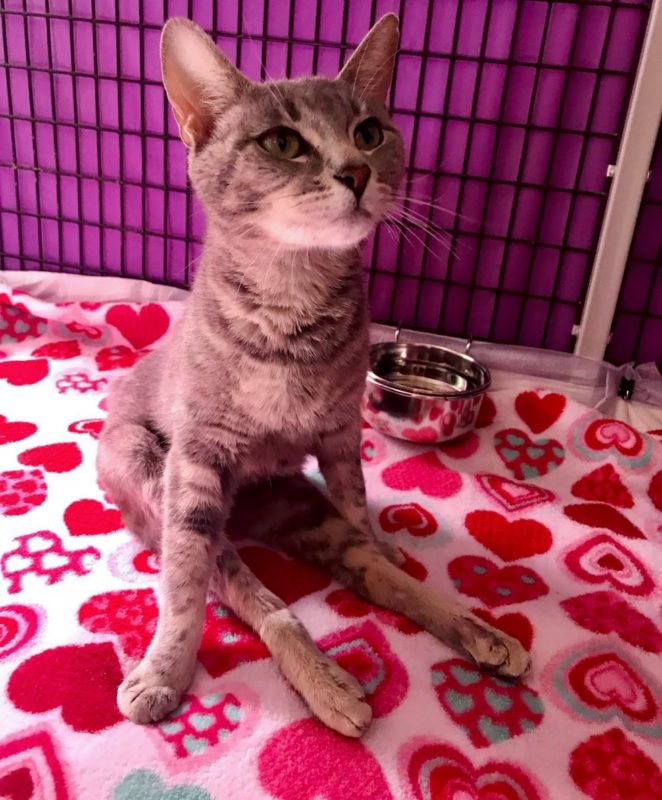 And then volunteers from the private shelter “Milo’s Sanctuary” helped the cat.

One of their volunteers, Zoe Sessler, as soon as she saw this cat, immediately wanted to adopt her.

As soon as Zoe took Trixie in her arms, the cat snuggled up to her and began to purr sweetly and rub against her arm. 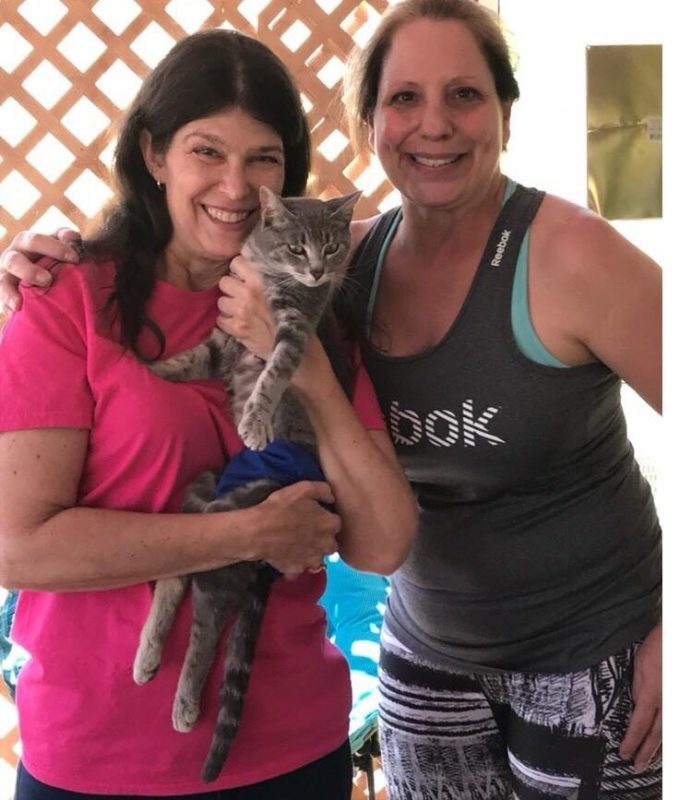 No one knows what life was like for Trixie until she got into shelters. It is not even known how old she is.

But now she’s all right. For the rest of her life, she will live in warmth and care.