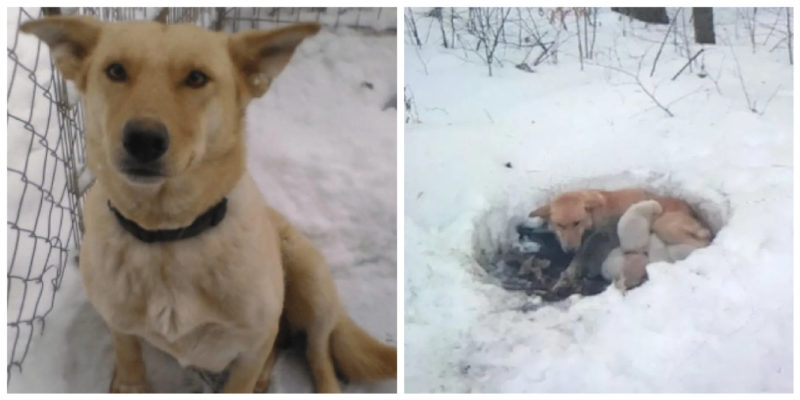 A snow storm hit the northwest of Minnesota.

Bad weather caught a dog that had just given birth and her six puppies in the forest. The young mother found herself in a difficult situation – she needed food and warm shelter, but she did not dare to leave the kids.

To somehow keep warm, the dog dug a small hole in the snow.

From hunger and cold, her milk was gone – the family was doomed to death. Fortunately, help arrived in time – people noticed the dog. They took the family to the Red Lake Rosie shelter.

The employees of the institution were amazed by what they saw.

Judging by the age of the puppies, Snowbelle – that was the name of the young mother – lay with them in the snow for at least three weeks.

She was slowly dying without food, but did not dare to leave her babies to their fate.

The shelter simply has no idea how the dog and puppies managed to survive in such conditions.

When they were brought, the young mother could hardly stand on her feet. She was very thin, afraid of people, but did not show any aggression.

After a few days of being warm and full, Snowbelle’s milk returned and she herself began to recover.

In six weeks, the shelter staff managed to find a new home for four puppies.

The two who remained with their mother remained to live in Red Lake Rosie, but not for long – an instant queue of people who wanted to take the kids home lined up. Snowbelle has changed for the better: she gained a few pounds and fully recovered.

And although it is more difficult to adopt adult animals than puppies, the shelter staff assumed that there would be a kind and caring owner for her, who would appreciate her courage and loyalty.

When the senior dog sees her best friend returning from the army, she starts crying with happiness
Interesting News
0 178

Meet Constable Sam, the lamb who fell off a truck and landed a better life
Animals
0 125

When the homeless man was taken to the hospital, all his faithful dogs were waiting for him for hours in front of the hospital
Animals
0 522