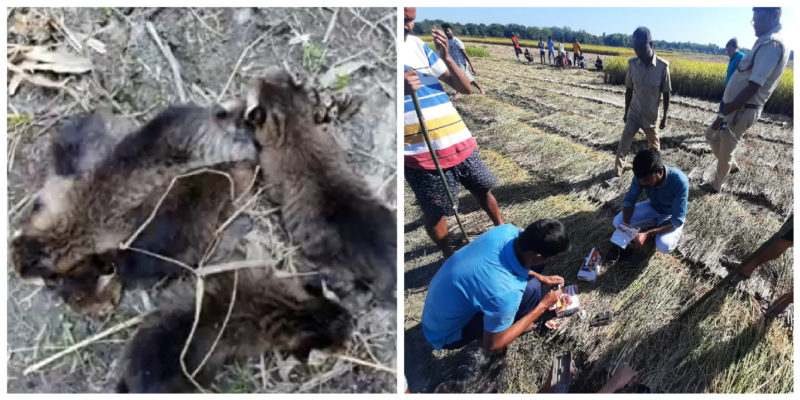 Recently, Indian Forest Service (IFS) employee Parveen Kaswan posted a video on Twitter about a wildlife rescue from one of the agricultural farms. The man deliberately did not indicate which one, since his work is connected with the protection of human influence on wildlife.

As follows from the video, during the harvest, farmers found five kittens in the grass.

Upon closer examination, it turned out that these were the cubs of a rare animal – a Jungle cat.

According to Parveen, this species is endangered and protected by law. The kittens were too small to survive without their mother.

There were no traces of the female nearby, but the farmers still hoped that she would return for the babies, and did not touch them with their hands.

The place of discovery was fenced off.

They decided to stop work in the field and take away all the equipment from the field so as not to randomly scare the mother cat.

To everyone’s happiness, the mother of the family returned – the movement of the animal was “caught” by one of the video traps. The reed cat walked around the field several times along its edge, scouting the situation, and around midnight decided to approach the kittens, and then dragged them one by one into the forest, to a safer place for them.

The farmers rested all night and the first half of the next day, allowing the reed cat to calmly find a new reliable nest for the kittens, and only then resumed work. The rescue video posted by Parveen immediately attracted the attention of users, and to date it has been viewed by more than 88 thousand people.

In the comments, followers thanked farmers and Forest Service employees for their “love for animals and kindness to nature.”