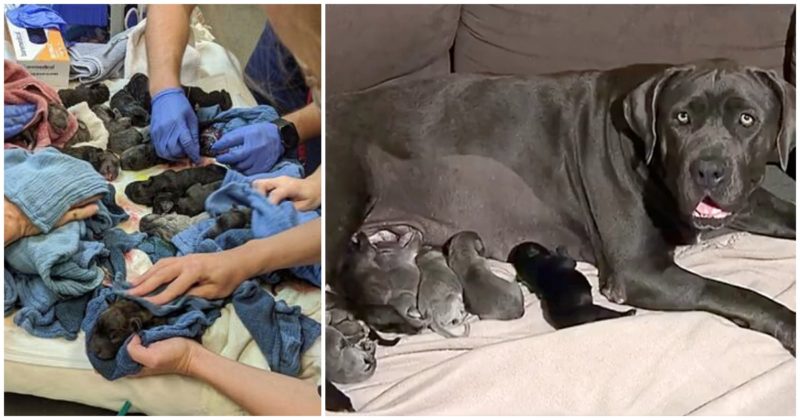 While experts in Britain were trying to train dogs to sniff out the coronavirus, in distant Australia they are busy with more prosaic things. They are rejoicing at the birth of 21 puppies at a time. This record belongs to a dog named Shadow, Neapolitan Mastiff breed, from the city of Queensland.

The publication reports that at first, the four-year-old pet gave birth to three puppies. The owner became concerned about the health of the dog and took her to the veterinary clinic, where doctors discovered that Shadow was preparing to become a mother for 18 more babies.

She had to have an emergency Cesarean section.

“We took an X-ray of Shadow immediately after she entered the clinic to see if she gave birth to all the puppies. And in the picture, we were surprised to find more than ten more babies ready to be born,” said veterinarian Patricia Zimmerman.

It took the medical team only 45 minutes to complete the operation.

Now Shadow is recovering at home, surrounded by her kids. Despite an impressive number of puppies, Shadow still failed to set a world record.

It belongs to another Neapolitan Mastiff, from Britain. In 2004, this dog gave birth to offspring of 24 kittens.

Hilarious moment: a baby hippo yelled out for help after a flock of birds tried to hitch a ride on its back
Animals
0 281

Catwoman of our times: what a woman with an unusual appearance looked like before plastic surgery
Interesting News
0 309