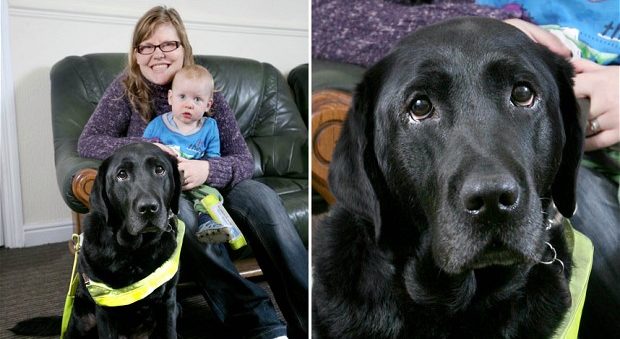 26-year-old Jessica Cowley, who was diagnosed with tunnel vision, walked past the parking lot with her son Jacob and a guide dog named Jet.

At that moment, one of the parked cars began to move. But the woman, who was not capable of peripheral vision, did not notice the impending danger.

Jessica was pushing a stroller with one-year-old Jacob when the car knocked her off her feet.

Seeing that the vehicle continued to move, the guide dog rushed forward and pushed the stroller to the side.

“Immediately after we left the curb, I heard the squeal of car tires, and then I felt a strong blow. The next second, the leash in my hand stretched like a string, and I realized that Jet rushed to my son. The dog managed to push the stroller away and so saved Jacob’s life,” says the 26-year-old British woman.

“The pram turned over, but the baby was out of danger. Then Jet ran up to me, licked my face and made sure I was conscious. She did her job perfectly.”

Immediately after the incident, Jessica and her one-year-old son were taken to the hospital, where doctors examined them. According to doctors, Jacob’s health was not in danger, but Jessica was not so lucky – she was diagnosed with extensive bruising.

Jessica never ceases to admire her pet: “At birth, Jet was diagnosed with symptoms of demodicosis – with such a diagnosis, puppies are culled. But we loved this puppy so much that we could not part with her, and sent Jet to special training to help me in everyday life: move around and avoid obstacles, but no one taught her that kind of stuff.”

Boji the dog is regularly spotted on ferries, buses and metro trains all around the busy city
Animals
0 161

Meet Wiley, the adorable Dalmatian puppy with a heart-shaped nose who won the hearts of social media users
Animals
0 1026