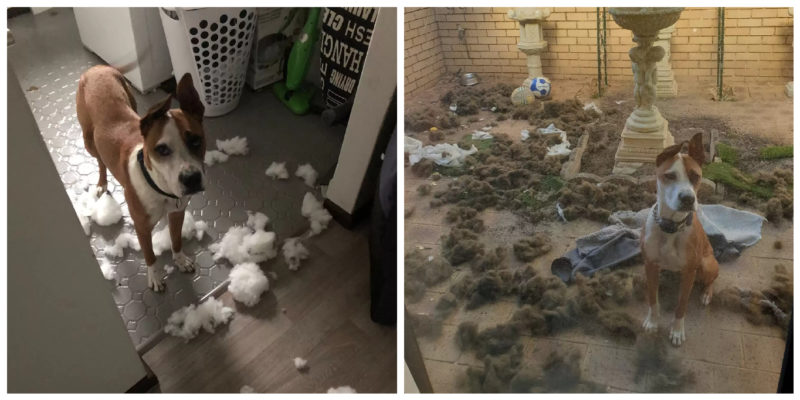 A dog named Dasher came to the family from a shelter.

At first, the puppy behaved quietly, but quickly got used to them. And it turned out that Dasher is a real tomboy who cannot sit idle for a second.

According to his owners, the restless pet eats everything he finds.

“Lingerie on a rope? Oh, sure! Leather sofa? Why not! He acts like a little kid on steroids. We can’t even leave a glass of water on the table – he will definitely knock it down,” complain the owners of the dog. When Dasher’s owner started dating the woman, he decided to introduce him to her pet, Charlie.

The dogs had a big age difference. So the couple doubted whether they could get along, but really hoped that they would become friends.

The first meeting of the pets took place at Charlie’s house. His owner Tiffany decided that it was better for the dogs to play in the fresh air and took them out for a walk. In the backyard of the woman there was a small decorative garden.

She put up a fountain and some beautiful statues, and laid an artificial turf around them.

No beds, no plants – Tiffany never thought that the mischievous Dasher could ruin anything.

But how little she knew then about him!

In an effort to impress a new acquaintance, the energetic dog not only tore his own bedding to shreds, but also uprooted all artificial grass, and dug deep holes in the ground.

But even this was not enough for him.

To top it off, Dasher broke and chewed the flexible pipes that supplied water to the fountain.

Seeing what her garden had become, Tiffany was speechless. But looking at the innocent look on Dasher’s face, who didn’t seem to feel guilty at all, she began to laugh.

The dog’s trick could put an end to the couple’s relationship, but Dasher’s owner was lucky: Tiffany loves dogs very much and is ready to forgive them a lot.

“When you take a dog into the family, you need to learn patience and understanding and be prepared for the fact that very unpleasant things can happen in the process of raising it,” the woman says. She has become quite attached to Dasher (as well as to his owner) and plans to take his behavior seriously.

According to Tiffany, deep inside this scoundrel is a kind and obedient dog, and the task of the owners is to help him get rid of bad habits.

The family let their cat into the house, and then found her exact copy on the sofa
Animals
0 230

Girl did not comb her hair for a very long time and hairdresser spent 13 hours to save her hair, see the reason
Interesting News
0 66