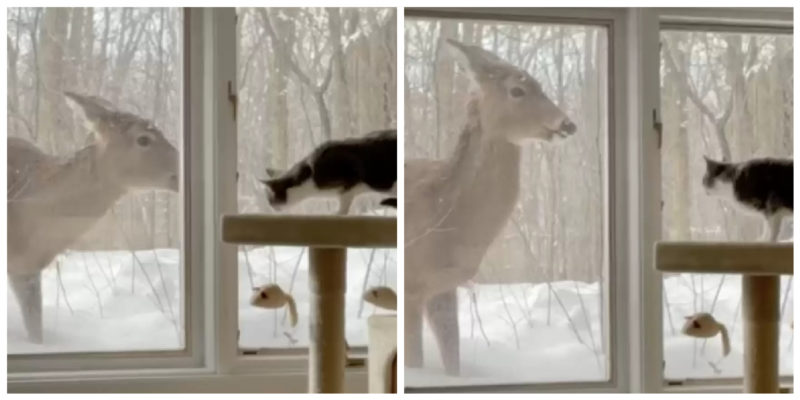 In the past, the cat Lulu had a dysfunctional family, a horder owner.

Horders are people who fill their apartment with useless junk. And sometimes horders “accumulate” animals: they take homeless cats or dogs from the street, dozens – much more than they are able to feed.

Even more than can be freely accommodated in an apartment.

Lulu was taken to a shelter from such house. She was sent to a foster family – to socialize, learn to purr, eat from a bowl and use a litter box.

Previously, Lulu had never had her own people, and she did not know what a loving family and her own territory were.

At first, the cat Felix lived with her, and they even got along. But then the friend was taken to a new house and Lulu was left alone. She learned to trust people, allowed herself to be stroked and scratched.

The cat allowed the new owners to touch the belly – the highest sign of trust.

But she was still terribly timid and shy.

“It’s so nice to see how she blooms before our eyes!” the owner, Jennifer, says. Lulu did not remain long alone in her royal chambers.

After a month of her life in the house, a charming young fallow deer began to regularly drop into the courtyard.

Deer are not uncommon in the area, and they wander into the yard of the house quite often, but they have never stayed for long before.

Dolly – as Jennifer and her family called her – began to come into the yard almost every day.

One day, Jennifer looked out the window of her room on the second floor and saw a deer standing right below it.

The woman galloped down the stairs and found a surprising sight: Lulu was looking at Dolly, and Dolly was staring at Lulu with all her eyes. After that day, their meetings became regular.

The further, the more friends became attached to each other.

Although they remained all the time on opposite sides of the glass, they were clearly glad to see each other.

At first, Dolly watched the cat from a respectful distance, and the cat was shy.

But soon Dolly began to go up to the window to gnaw the leaves from the branch near the window. Lulu also relaxed completely in the presence of the deer.

Once she even dozed off under the watchful eye of a deer.

Now Dolly can even come several times a day.

And the whole family is sure that the reason for frequent visits is their cat.

Dolly loves to visit her long-tailed friend and seems to be concerned about her well-being.

To the thrill of conservationists, six Komodo dragons eggs hatched for the very first time at the Bronx Zoo
Interesting News
0 188