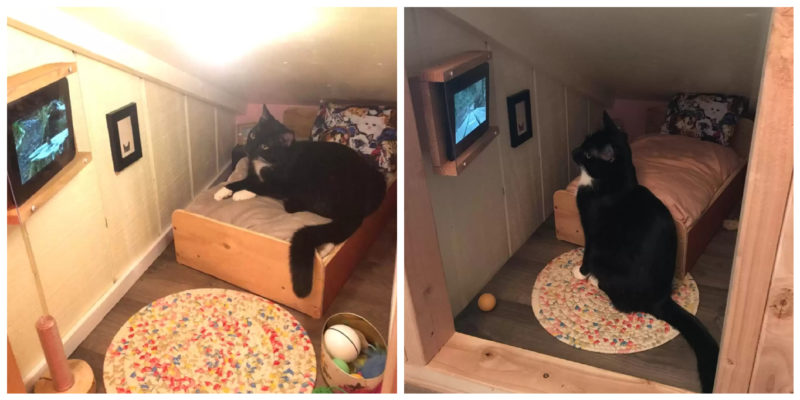 Wyatt came to Brian Davies’s family from a shelter.

The young black and white cat very quickly got used to the new house and immediately found his favorite pastime. He could sit for hours at the window, waiting for a bird to sit on a tree or a squirrel to come running.

But, nevertheless, the fauna outside the window did not differ in variety, and sometimes the cat began to get bored.

The owner found an original way out. Brian took out a tablet, downloaded “movie for cats” and showed it to Wyatt.

The cat was absolutely delighted! He had his own TV!

But Brian decided not to stop there – and make the cat his own room so that he can enjoy personal movie shows.

The man thought – where in his house he could allocate a secluded place for a cat? And the solution came by itself: unused space along a wall near his bedroom. It was very tiny, but the cat was small. And Brian got to work.

Brian made a wooden bed with a mattress and patchwork quilt, a toy chair and a toy box for the cat’s bedroom.

He decorated the walls of the bedroom with a miniature model of a fish and paintings with portraits of cats in a jabot. He even knitted a cozy round rug.

Brian equipped a kind of glazed “showcase” on the wall: it was possible to place an included tablet in it; the makeshift television would be securely mounted and protected from naughty cat paws, in case Wyatt wanted to hunt a digital bird. And now the decisive moment has come – to show the bedroom to the main customer.

How did he react? He was delighted.

Davies was initially hesitant about whether his pet would use his room, but it quickly became his favorite spot in the house.

The owner jokes that he acts like a teenager who has finally been given a private room. “He spends a lot of time there, asking to play his favorite show before bed.”

Of course, Wyatt does not spend all the time in his bedroom, but he loves to go there to take a break from the attention of the owners. Davies spent a huge amount of time furnishing the cat house. But the man is sure that it was worth it.

“This cat is my whole world,” he says.

Dog was sitting on the car and did not let anyone close: the stolen car was returned to the owner with a new friend
Animals
0 158