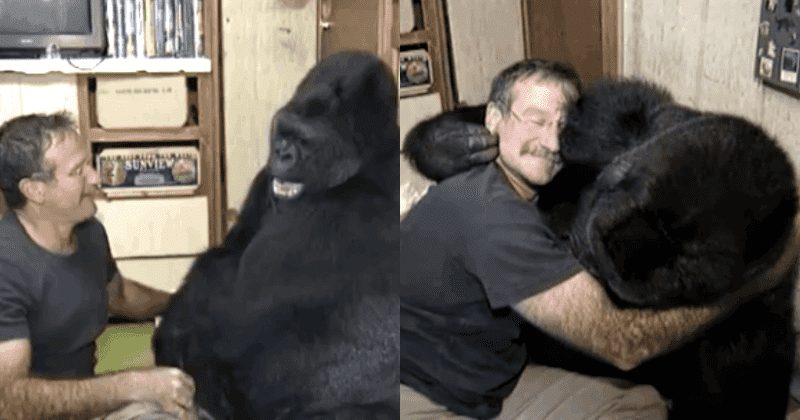 Robin Williams was a great humorist and had a rare gift for feeling his audience.

It was his communication skills that once allowed him to surprisingly quickly make friends with a gorilla named Koko, who knew how to communicate using sign language.

The fact is that Koko, along with her other brothers, was under the care of an organization called the Gorilla Foundation, whose representatives once contacted the star with an unusual request.

A few months earlier, Coco’s best friend, a gorilla named Michael, had died. After that, she developed severe depression and began to avoid communication.

The staff decided to try to cheer her up and contacted Robin Williams.

The comedian agreed to try himself in this new role.

Shortly after meeting the gorilla, Robin spoke about her in an interview with Today:

“We managed to share with each other something extraordinary – laughter. Koko understands English and knows more than a thousand gestures, with the help of which she communicates and shares with people her thoughts and experiences about everyday events, life, love and even death. This meeting was just unforgettable.”

In the video, which captured their communication, it is noticeable how quickly they managed to get along.

Koko, not at all embarrassed, plays with Robin, takes off his glasses and tries them herself, and even steals his wallet and gets acquainted with its contents.

In 2014, many years after their meeting, Koko was very upset to hear about Robin’s death.

One of the employees of the Gorilla Foundation said that upon learning of this, Koko immediately stood in place and gazed at the ground.

Moments later, she made a gesture for “cry” in sign language. The elderly gorilla was shocked by the sad news of the death of her actor friend.

Unfortunately, Koko herself also died in 2018, reaching a very respectable age for a gorilla – 46 years.

Meet Miss Bones, the dog who can’t get enough of her favorite “chair”
Positive
0 82